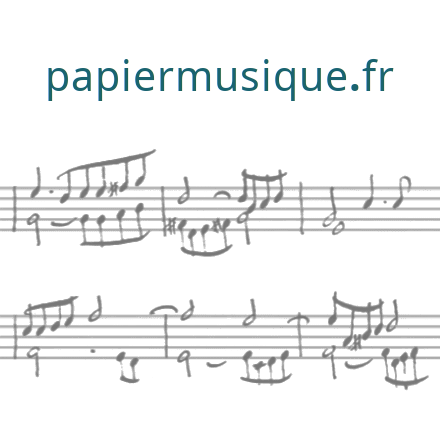 The best place to find blank sheet music.
All our papers are available free of charge in pdf format.
Since our french website was created in 2008, you have downloaded more than 1249245 copies...

Watch out! If you don't know what the interval between E and F is, or if you don't know the order of the sharps, there is no point in going further in this doc : it would be of no use to you... On the other hand, if you practice early music or if you handle quarter tones with dexterity, it is likely that you will be able, through this presentation of Cordier's temperament, to see a little more clearly the very vast and oh so polemical subject of temperaments.

Sound is a physically measurable and appreciable element : it can be defined by its timbre, intensity and pitch. Scientists use purely acoustic units of measurement to evaluate a sound. This is fortunately not the case with music. Much more meaningful terms are used :

For example, timbre can be described as warm, clear, hollow or hard. About level, one will speak of a strong sound or a weak sound. Some attributes can describe both timbre and level at the same time: a harsh sound is a very loud and bright sound ... there is therefore no precise scale in music to define the timbre of sound.

When it comes to pitch, it's not enough to say that a sound is low or high pitched, you need other cues: you use notes. These are the degrees of a scale that includes only a few sounds, chosen among all those existing. It's a bit like having a small number of colors on a painter's palette, whereas nature offers us an infinite number of colors. The paintings, then created with this palette reflect this, even if we decide to occasionally mix them. If we change the colors of the palette to redo the same paintings, our perception of the works is totally different. In the same way that we can change the colors of the palette infinitely, we can transform our musical scale, which is in fact a palette of notes.

In Western culture, for reasons we will explain later, we refer to temperament as various palettes that have milestoned our history of music. There is often a confusion between today's usual temperament ( pure octave equal temperament ) and an immutable physical measurement system of sound pitch. However, the widespread use of this temperament only dates back to the 19th century. Mozart, Bach or Vivaldi did not all compose in the same temperament. So today we listen to their works differently from what they might have imagined or heard.

As pointed out , musical scales are made up of degrees that are called notes. These degrees may be different according to periods or cultures. A music scale is not characterized by the absolute pitch of its notes, but by the intervals between them. However, not all intervals have the same weight when composing a music scale: Octave and fifth, because of their prominent presence at the very heart of the sound grain, are the basis of most music scales used throughout the world.

For example, if we up the pitch by 12 pure fifths and in parallel by 7 pure octaves, the E#, which should normally share the same key as the F on the keyboard, is then one Pythagorean comma too high :

In order to tune a keyboard instrument, certain intervals have to be tempered, i.e. shortened or enlarged.

Temperament is therefore a tuning compromise.

Throughout periods and cultures, various solutions have been used to manage this singularity :

Pythagoras was the first to describe this cycle of fifths which bears his name. In Western culture, the untempered system of Pythagoras was used until the 15th century: a fifth was totally sacrificed to keep the other 11 perfectly pure. Apart from the too small false fifth of a comma, the thirds were very large (Pythagorean thirds) compared to pure thirds. In the 16th century the meantone temperament appeared which favoured the pure thirds: the fifths were all equally shortened except one which was too wide (wolf fifth).

In the 17th and 18th centuries, irregular temperaments were used ( Werckmeister, Rameau... ) : not all fifths were shortened by the same amount. The uneven intervals favored individual colors of each tone, but not all modulations were possible.

From the 18th century, the equal temperament with pure octaves gradually became the norm: The 12 fifths are equally shortened by a 12th of comma. All intervals are equal and the most complex modulations became possible. This widely spread temperament has however some significant flaws : The medium is dull and it is not very compatible with string instruments (which are tuned with pure fifths).

In the 20th century, Serge Cordier invented a temperament that preserves all the pure fifths. As opposed to all other temperaments which make the cycle of fifths and octaves match by shortening the fifths, the cohesion of the system is achieved by stretching all the octaves by 1/7 of comma.

“Musically speaking, the perfect fifths of this system, the very slightly large octaves, the Pythagorean or Pythagorean-like harmonies result in trebles with clear and bright colors, contrasting with deep basses and a medium animated by a warm vibrato. These qualities are essentially resulting from the fast beats of the 10ths close to the Pythagoras ones, and from the Pythagorean 17ths of the perfect fifths equal temperament. This gives the high notes a lively and sparkling aspect, which enhances and clearly detaches them. The medium is animated by very perceptible oscillations whose frequency varies between 4 and 8, and which suggests the vibrato of the strings. For a piano tuned "scientifically" according to the traditional well-tempered scale, the same intervals are much too "slow": hence the feeling of flatness in the high register and lack of life in the medium.” Serge Cordier

Although some, like Cordier, still open new paths, or that early music is now often replayed in the temperaments of the period, this does not stop the worldwide standardization around a single temperament: the equal temperament with pure octaves.

Temperaments, and more commonly tuning systems, have heated up many debates since the dawn of time. It is true that, as for squaring the circle, this insoluble equation opens the field to all hypotheses. In any case, we cannot conclude that one temperament or another is superior, and each reflects a particular era, aesthetic or culture.