Set Up Your Music Stands !

Tick, tock, tick, tock. This high-precision virtual metronome is made available to you by papiermusique.fr. It can be used in your web browser without any prior installation. Take out your instruments and click on the button to start it!

This virtual metronome is composed of several modules inside frames. This presentation makes it possible to separate the required from the extras.

Its use is very simple and follows the usual paradigm of the electronic wheel metronome found in most manufacturers such as Korg®, Seiko®, Taktell®…

The big central dial allows you to change the tempo, as well as the  ←  and  →  arrows on the keyboard.

The button  ►  starts and stops the metronome. You can also use the space bar on the keyboard.

To set the metronome to a tempo you have in mind, click the tap button or the T key on the keyboard. The metronome will automatically match your pulse.

It is up to you to find out what additional features are available... if you need them...

Let's Play On The Beat ! 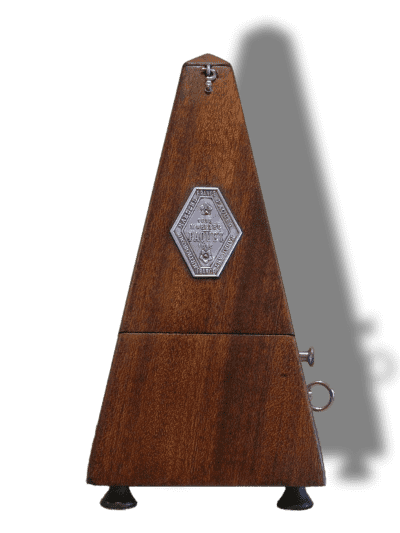 The metronome is to music what the compass is to navigation... said the Institut de France when this pendulum instrument was first invented. Since that time, the metronome has never ceased to strain the spirit and abilities of the musicians. Indeed, who hasn't experienced these difficult rehearsal sessions where the metronome imposes stubborn tempo ?

Thank you, my metronome! You, Well known little tool that measures and splits time, you are never awarded enough to train us with your perfect and accurate musical beat! However, countless musicians have earned, by dint of self-sacrifice, the stripes of a solid musical technique after having bravely climbed, step by step, the notches of your graduated ruler... 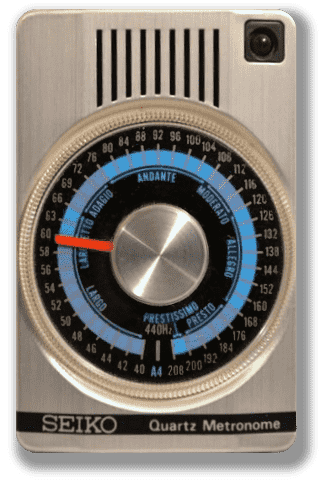 And you, musicians, don't worry, you are not alone in having blamed it! Even Beethoven, at first very interested in invention, finally declared:

"No metronome at all! He who has a good feeling needs none, and it will be of no use to him who lacks this talent."

More than 200 years of use by musicians from every walk of life lead us to believe that it still has a certain usefulness...

But How Did It Come to This?

It all began in 1696 when a Mr. Étienne Loulié (1654-1702), musician, professor and theorist of his state, invented a system known as "chronomètre" based on Galileo's seconds pendulum. The object does not emit any sound, but it provides good tempo stability. You only have to observe the pendulum swing to find the moment when the wire passes through the center of the body... and that's the tempo! The invention was noticed enough to be rewarded by the Academy of Sciences. 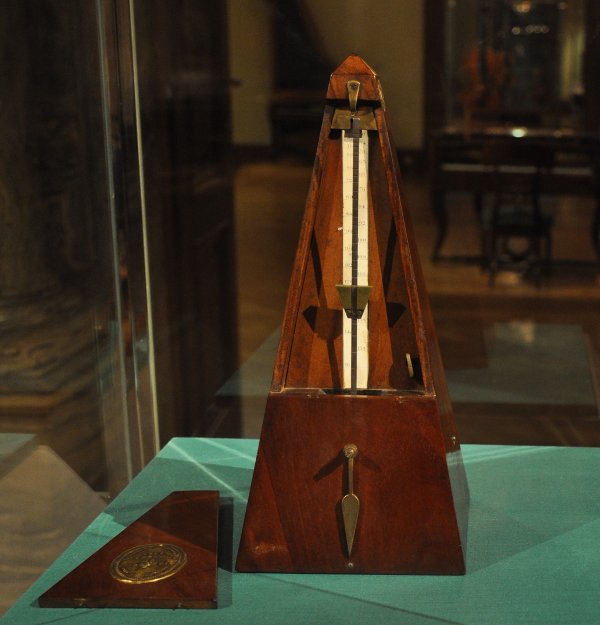 A few years later, Dietrich Nikolauss Winkel (1777-1826) was a clockmaker in Holland. Fascinated by these mechanisms, Dietrich lives and breathes for the art of horology! In 1812, he proves that a pendulum can have regular beatings provided it is weighted on both sides of the axis. His technical skills then allowed him to design a musical chronometer with very regular beats, even at slower tempi. In 1814, he donated his first copy to the Royal Netherlands Academy of Arts and Sciences. Winkel's enthusiasm for the mechanics of time did not allow him to take advantage of his discovery. Someone else, Johann Nepomuk Mälzel, was going to do it without his knowledge. For Winkel, time was only science, but for Mälzel, time was money...

Taking credit for Winkel's invention, Maelzel filed a French patent application in 1815 "for a kind of chronometer called a metronome for use in music". Once this patent was granted, he added a graduated scale of tempi to the metronome and filed a new patent in 1816 in England. He legally became the father of the mechanical metronome still in use today.

And since then, we've all been there!

Too much beat is too much! Did you ever think you'd laugh at the metronome? Didn't you? Take a look at this surprising video which becomes hilarious by the comments that follow.

All joking aside, musical history has never ceased to flirt with the mechanical sciences, perhaps in search of absolute perfection of its expression. The metronome has not escaped its fate, as Aurélie Barbuscia's exhaustive article on the subject shows (in french): Musical practice, between art and mechanics. The effects of the metronome in the musical field in the 19th century. 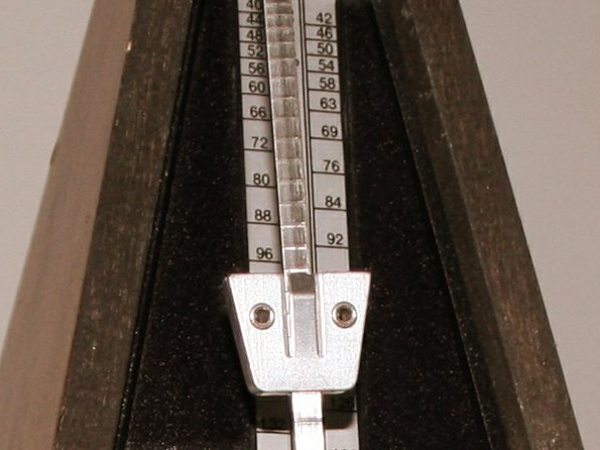 For the most addicted, check out Pierre Galin's description of the double scale chronometer in his Rationale for a New Way of Teaching Music (First published in French in 1818).

it's up to each of us to do our own methodical tick-tock analysis. Make up your own mind by listening to the Maelzel Canon composed by Beethoven, or Ligeti's Symphonic Poem for 100 Metronomes (1962). Take the time to experience the artwork and appreciate the ingenious starting system, the sound effect of knitting machines, to bless the end of the piece where you will finally find your clear ideas!

Finally, for those who would like to know everything about the Winkel/Mäezel saga, Paul Charbon tells the story in all its details, down to the precise references of the patents. Descriptions and related drawing plates included : nepomuck_maelzel.pdf

The best place to find blank sheet music.
All our papers are available free of charge in pdf format.
Since our french website was created in 2008, you have downloaded more than 1187914 copies...